The Toronto Symphony posted this terrific video highlighting a workshop with composer Tod Machover and Toronto school kids who composed music inspired by the sounds of their city. The kids used Hyperscore, guided by a creative group of music teachers. We are looking forward to seeing the curriculum they developed! Read more about the A … END_OF_DOCUMENT_TOKEN_TO_BE_REPLACED

We have long wanted to develop a Mac version of Hyperscore, and hope this is the year we can make it happen! To get started, we need a great application developer with a passion for music to redevelop Hyperscore for Mac OSX and possibly iOS. If you're interested, please contact june@harmonylinemusic.com. Include a cover letter and … END_OF_DOCUMENT_TOKEN_TO_BE_REPLACED

Composer Stacy Garrop was invited by the Ying Quartet's David Ying to lead a series of Hyperscore composing workshops for the 2011 Skaneateles Festival. The resulting works were performed by string quartets at the Festival. In an interview with us, Garrop shared some of her lessons learned from mentoring non-musicians to compose music using our … END_OF_DOCUMENT_TOKEN_TO_BE_REPLACED

We were Googling around for some images of Hyperscore and unearthed this five-year-old blog from Harmonyline Music, back in the early days of the company. It's fun to read and there are some wonderful nuggets! Read the original Hyperscore Blog.

We recently received audio recordings of several compositions by participants in the Hyperscore II project for the famed Skaneateles Music Festival. In April and May of 2011, composer Stacy Garrop visited schools in upstate New York, teaching students what it takes to compose music. Stacy helped kids of all ages to discover the music within; participants … END_OF_DOCUMENT_TOKEN_TO_BE_REPLACED

Take a listen to this snippet from a song called "Dream", arranged and performed by DOGMA, one of the most popular rock bands in Armenia. The song was composed with Hyperscore by a middle schooler in Armenia as part of the A-to-A project. We think it rocks! 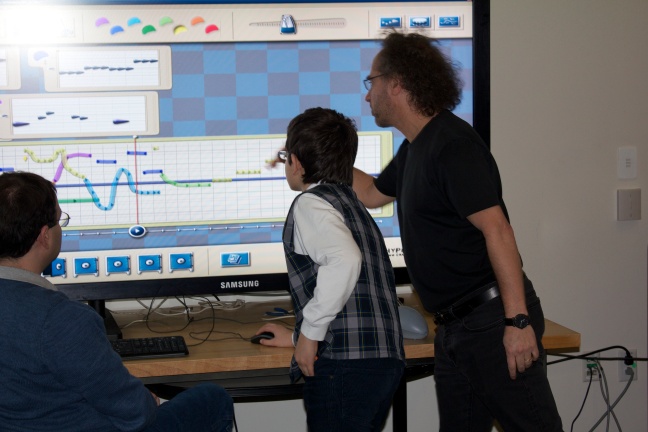 One of the core ideas in Hyperscore are “motifs” – small melodies and rhythm patterns – which form the basic building blocks from which to construct musical compositions. In this video, Tod Machover coaches a groups of children in Armenia and the U.S. as they work together to create a new piece to celebrate the 20th anniversary … END_OF_DOCUMENT_TOKEN_TO_BE_REPLACED

From the Toy Symphony project homepage "I can play [the Hyperviolin] and it will sound like a flute or a human voice, yet using the technique of the violin that I have learnt. The possibilities are limitless...And the kids respond to it because it is current. Their imaginations are stimulated, they're having fun, and they know they are … END_OF_DOCUMENT_TOKEN_TO_BE_REPLACED

This version of Hyperscore runs on Windows 7 and 8, and can be downloaded HERE. We are offering Hyperscore V4.5 at a special price of $39. To qualify, simply subscribe* for our free e-alerts via the sign-up form in the page footer, and we'll send you the discount code. (Please allow 48 hours for the discount … END_OF_DOCUMENT_TOKEN_TO_BE_REPLACED

The opulent Armenian Opera Theater in the heart of Armenia’s capital Yerevan reverberated with some truly fresh sounds on the evening of February 25, 2012, as two of Armenia’s elite musical ensembles dug into new pieces composed entirely by children from Armenia and the United States. The concert, “A-to-A: A World in Harmony,” featured the Armenian Philharmonic Orchestra and DOGMA, one of the country’s most popular rock bands. The event was co-sponsored by the LUYS Education Foundation and the U.S. Embassy in Yerevan to celebrate the embassy’s 20th anniversary. Despite the composers’ youth – they ranged in age from 8 to 14 – their work was rich and rewarding to hear, thanks to the boost their musical imaginations received from Hyperscore, a music-creation software developed at the Massachusetts Institute of Technology’s Media Lab by a team led by renowned composer Tod Machover. Hyperscore puts unprecedented composing power into the hands of people who long to express themselves musically, regardless of their formal training. More than that, Hyperscore turns out to be an exceptional tool for collaborative creativity.

How will you use Hyperscore?

Copyright 2018 by New Harmony Line. Unauthorized use and/or duplication of this material without express and written permission from New Harmony Line is strictly prohibited. Excerpts and links may be used, provided that full and clear credit is given to “New Harmony Line” with appropriate and specific direction to the original content.