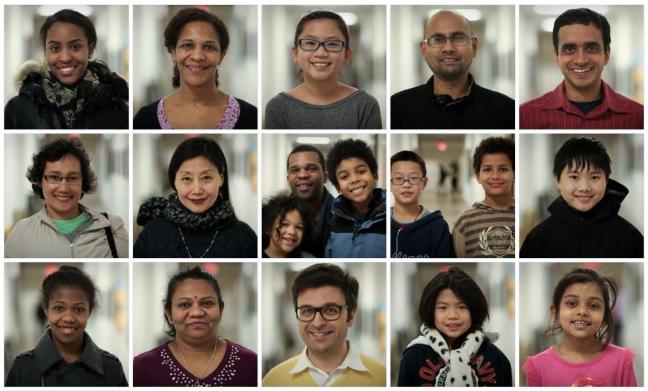 A Toronto Symphony is the first of composer Tod Machover’s City Symphonies. It was commissioned by the Toronto Symphony Orchestra, who premiered the piece in March 2013. With this project, Machover – who is Muriel R. Cooper Professor of Music & Media at the MIT Media Lab – “rethought the symphony as a community event” (Musical America), a portrait of a place created for and by the people who live there.

As Machover described when he launched the project publicly in 2012, the goal was to create a sonic portrait of Toronto by “listening” to the city in order to discover its special features, by inviting all Torontonians to collect and submit their favorite sounds of the city and also to create original musical compositions using the Media Lab’s Hyperscore software, and then to engage in online and in-person workshops and activities to help shape the composition itself. The result produced a model which Machover and his team have brought to cities around the world. The MIT Symphony Orchestra (MITSO), led by Evan Ziporyn, programmed A Toronto Symphony for a concert that was to have taken place on March 13, 2020.

For this occasion, Machover revised the composition and also invited the student players of MITSO to collaborate with him to create a new section of the piece, now called “MIT Interprets Toronto”, a new twist on the City Symphony model. Another surprise was in store for the project when it was announced that MIT had to shut down – and students needed to leave campus – on March 13th, the very day of the concert, which needed – of course – to be cancelled. However, the MITSO players voted to come in for what would have been the dress rehearsal on the evening of March 12th, to play together for one last time before dispersing, and to record the music for the concert.

This video is of that March 12th recording, filmed by Peter Torpey, Paula Aguilera and Jonathan Williams. Torpey – who created the original visuals for the Toronto premiere – combined live footage of MITSO with collected visuals from Toronto, and added evocative new material as well. The video of Toronto’s CN Tower in the Toronto Dances finale is live footage from the 2013 premiere, when Machover, Torpey and team synchronized the tower’s LED lighting to the orchestral performance which was broadcast by the CBC.

Of this video performance, Tod Machover says: “Although we were not able to give the public performance of A Toronto Symphony as planned, it is especially meaningful to have this documentation of the piece that represents months of devoted work by MITSO and Evan Ziporyn. I am delighted that these young musicians were able to perform this difficult music so well. I’m also pleased that the piece ’transposed’ smoothly from Toronto to Cambridge (complete with a new section), and that orchestral music, electronics, “found” sounds, and multilayered visuals are combined just as I originally imagined them.”

How will you use Hyperscore?

Copyright 2018 by New Harmony Line. Unauthorized use and/or duplication of this material without express and written permission from New Harmony Line is strictly prohibited. Excerpts and links may be used, provided that full and clear credit is given to “New Harmony Line” with appropriate and specific direction to the original content.